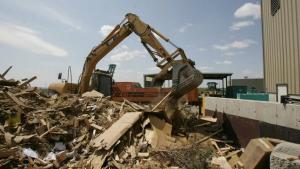 Another unnecessary tragedy as a front loader backs over a pedestrian at a transfer station.   Although we teach GOAL: Get Out And Look, we realize that is not an option when running yellow iron.  This is a good example of an opportunity to use engineering controls, but not just a backing alarm.  Over time, the constant beeping becomes ubiquitous with the environment and no longer serves its purpose.  In this situation, multiple back up cameras and good training will prevent a re-occurrence.  Please be sure your heavy equipment is outfitted with full-range backing cameras.  They are inexpensive.  Then provide your operators with continuous training.

A 63-year-old man was killed Friday afternoon at Basin Disposal outside of Pasco after a frontloader accidentally ran him over.

David Dietrich was guiding a customer back into one of the transfer station’s ports, said Franklin County Coroner Dan Blasdel.

A Basin Disposal frontloader didn’t see Dietrich and knocked him over, Blasdel said.

The driver of the frontloader kept going, running over Dietrich with a back tire.

Dietrich is a member of the Dietrich family, which founded Pasco Garbage Service in 1948. The company later became Basin Disposal.