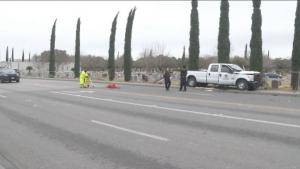 This is one of the most tragic and profound fatal accidents in the past several years.  Here a young Parks & Recreation worker dies in a single vehicle collision when he lost control of his truck, ran into a fence and was impaled through his throat by a fence post.  Once again, professional, outcome-based training could have prevented this tragedy.

An employee with the City of San Antonio has died after he crashed into a fence Sunday afternoon.

Authorities were called to General McMullen and Castroville Road at about 2:30 p.m. for reports of an accident. When officers arrived, they found 23-year-old Jeffery Castillo with a pole stuck through his throat. Police said he lost control of the vehicle, crashed into a fence for 50 feet until a pole pierced through his neck. No other cars were involved and he was the only person in the vehicle, police said.

Castillo worked for the city’s Parks and Rec Department.