PennDOT Worker Killed in I-99 Accident

PennDOT Worker Killed in I-99 Accident 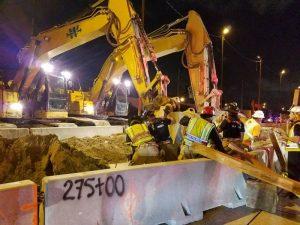 This time, we lost someone in Pennsylvania.  But, it could have happened anywhere.  Where will the next fatality happen?  Please be vigilant or it could be in your fleet next!  Once again, we had a public service employee out on the roadway dodging traffic.  Unlike our recent run of pothole repairs, this time he was setting flares when he was struck by an out-of-control car.

We always teach in our professional defensive driving courses that bad weather and snowy conditions never cause accidents.  The accidents are caused by people who fail to adjust their driving behaviors to compensate for the limited visibility and traction.    Unfortunately, that lesson is not included in basic Driver’s Ed. classes.  That’s why our professional men and women in public fleets are held to a higher standard.  They have allow for the mistakes of all those amateurs out there.  You can find out more under Become a Member.

Robert Gensimore, 45, of Spruce Creek was working about 3:41 p.m. along the southbound travel lanes on I-99, north of Kettle Road in response to an earlier crash, according to state police at Hollidaysburg.

At mile marker 35, Gensimore was setting up flares when a Chevy Cobalt, driven by Guanglong Hu, 29, of State College, slid out of control and struck him, police reported. Gensimore was pronounced dead at the scene, according to police. Hu sustained minor injuries, while a passenger in the Cobalt, Chao Shi, 25, of State College was not injured.

Speed, snow and ice conditions were factors in the crash, police said.

State police at Hollidaysburg are investigating the fatal accident.

The southbound lanes of I-99 were closed for about two hours Saturday as several crashes occurred in the same area at the same time during heavy snowfall, police reported.