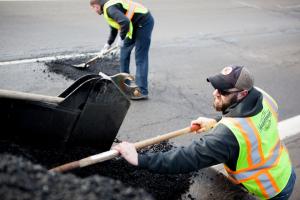 Pothole repair is one of the most dangerous activities of Public Service Employees do.  At PSS, we’re working on procedures to make this necessary job safer.  We are developing not only outcome-based training for how to do the job safely, but also procedures crews should begin following.  It is completely unacceptable to allow live traffic to go whizzing by at 70 miles per hour while we have operators carry hot patch in a shovel and walking between the cars.

I hate to criticize someone I have never met, but this quote from the article scares me to death:

Hackbarth said he enjoys the thrill that comes with working so close to danger.  “We’re working inches away from 70-mile per hour traffic. There’s always that slight chance you can get hit,” he said. “This job is fun though. It’s exhilarating and there’s an adrenaline rush that comes from it. That’s why I enjoy doing this.”

We concede there is increased risk in this occupation, but we strongly encourage you to hire people who avoid risk.  Getting a thrill and an adrenaline rush is the first step towards a fatal collision.  Please put signs out at least ½ mile ahead and use active flaggers.

ANN ARBOR, MI – Most people wake up each morning unworried that it might be their last day on earth. But for 60 workers who fill potholes on busy freeways and roads in Washtenaw County, there’s always some concern. The “pothole patrol” crew at the Washtenaw County Road Commission is preparing for its busiest time of year when the weather starts to warm up and the roads need repair.

While the crew fills potholes on busier city streets and back roads across the county, its most challenging task comes is working around cars going 70 to 80 mph on the freeway. Adam Lape, superintendent of maintenance for the road commission, has worked on roads for over 13 years. Lape has seen co-workers get hit by passing cars over the years and said an accident can happen in the blink of an eye. “When you have to work in the middle lane, it’s dangerous because you have to find a place to get to it from the shoulder without getting run over. That easily increases the danger quickly,” he said.

Crews wear bright vests and have work trucks ahead of them and behind them, but they still have to enter the traffic lanes to do their job. Lape’s job now as superintendent is to watch over the crew members while they are patching. He watches traffic as they fill the potholes and will try and control or slow traffic on less busy streets to make their jobs easier.That is nearly impossible on freeways such as Interstate 94.

“Eventually, you get used to it. It keeps you young,” Lape said. “It’s definitely a scary situation at times, but you start finding ways to process it in your mind. If you go out and you’re scared all day long, you will probably make a mistake which will get you hurt or someone else hurt.” Lape said l-94 and U.S. 23 are among the most dangerous freeways to work and unfortunately tend to have the most potholes. The road commission is responsible for about 1,700 miles of road.

Justin Ott, a heavy truck driver for the road commission, has had some close encounters with danger himself while filling potholes. He said you never know what a passing driver is going to do and how to react. “It’s always scary filling potholes near the guardrail. Sometimes you have to shut a lane down,” he said. “People don’t realize that when you merge over it’s a last-second decision. That’s the part that you always worry about.”

Tim Hackbarth, a group leader of the truck drivers for the road commission, started as an engineer a few years ago before moving to the roads.  Hackbarth said he enjoys the thrill that comes with working so close to danger.  “We’re working inches away from 70-mile per hour traffic. There’s always that slight chance you can get hit,” he said. “This job is fun though. It’s exhilarating and there’s an adrenaline rush that comes from it. That’s why I enjoy doing this. “A lot of people don’t like being out here, but I love the freeways.”

The road commission’s other main priority, snow removal, interferes with pothole maintenance, Lape said.  Once the salt from the trucks melts, it saturates the road and breaks apart the concrete and asphalt. The causes a never-ending battle for road maintenance.  “We have to take advantage of the warmer days when we can,” Lape said.   Emily Kizer, spokesperson for the road commission, said the recent weather change has not helped road conditions. “It’s all part of living in Michigan,” she said. “We’re doing a lot of work to get our road conditions in better shape around the county. Potholes are going to be a part of roads for a long time.” The commission encourages residents to call 734-761-1500 if they spot a hazardous pothole in Washtenaw County and to report non-hazardous ones on its website www.wcroads.org.