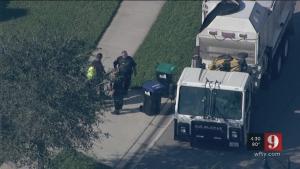 A needless tragedy, when the solution is so simple. G.O.A.L. Get Out And Look.  Don’t allow yourself to be in this position. Watch our 30 GOAL video and help us make the world a safer place.

LAKE NONA, Fla. – A garbage truck backed over and killed a 73-year-old man who was walking his dog Wednesday morning in Orange County, the Florida Highway Patrol said.

The fatal crash was reported at 7 a.m. at Prestbury Drive and Kelsall Drive, east of Narcoossee Road near Lake Nona Middle School.

FHP officials said James Lear was walking his dog on Prestbury Drive when the garbage truck backed over him and his dog.

Lear was taken to Florida Hospital East, where he died, troopers said. Lear is the stepfather of former Orlando Magic player Drew Gooden, an official said.