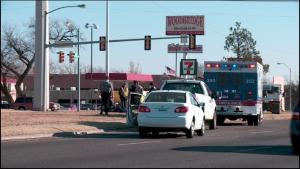 Never stop or park a vehicle on a public roadway, unless you put out a live flagger or warning signs.

OKLAHOMA CITY – A worker for the City of Oklahoma City was taken to a nearby hospital after being hit by a vehicle.

Emergency crews were called to the area near N.W. 39th St. and Tulsa Ave. around 10 a.m. on Tuesday following an accident.

Investigators say a city crew was taking care of the landscape along the right of way when their truck was struck by a driver.

Officials say that the truck was in a lane of traffic with emergency flashers on at the time of the crash. However, the other driver claims that they were blinded by the sunlight and didn’t realize the truck was stopped.