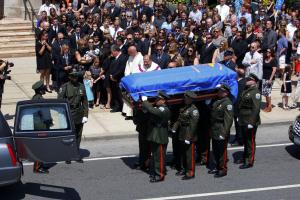 The widow of a city Department of Sanitation worker who was crushed to death by a runaway street sweeper won a $41.5 million negligence award against the city Tuesday.

The Queens jury granted the massive sum to Bina Frosch, who lost her husband Steven Frosch, 43, when the vehicle pinned him inside a city garage in Maspeth in June 2014. At the time, the couple’s four children were ages 11, 8, 3 and 7 weeks.

“The loss has been unbearable for me and my four children, and it always will be,” Bina Frosch told The Post.