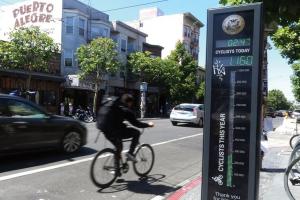 Bike commuting is the fastest-growing mode of transportation. And San Francisco can attest to that.

Every time a cyclist rolls past one of the city’s digital bike counters — or “bicycle barometers,” as they are officially called — the daily and yearly totals tick up. In 2016, there were an estimated 82,000 bicycle trips taken per day in San Francisco. That number has been steadily rising since 2006, when manual counting of bikes began.

Today, there are 75 counters — some with digital displays, some without — throughout San Francisco. City planners use the data to better understand how bicyclists use roads and bike lanes.