Divided Yet Productive: How Colorado Had a Gridlock-Free Year

Divided Yet Productive: How Colorado Had a Gridlock-Free Year 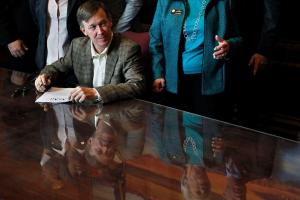 “Compromise” has become such a loaded word in American politics that Colorado state Rep. KC Becker refuses to use it. She prefers the term “common ground” instead. But regardless of the word used, Becker has helped craft dozens of successful compromises this year.

Becker is the Democratic leader in the Colorado House, which her party controls. Republicans hold a narrow majority in the state Senate. Given the partisan split, legislators in both parties decided to do things the old-fashioned way, working out deals that left both sides a little unsatisfied but nonetheless afforded them victories. “A lot of people got the message that it was really time to work through differences and resolve things,” Becker says. “On each side, people were more willing to come to the table and stay until we found the common ground that would get folks to yes.”

Greenblatt, Alan (2017, September). Divided Yet Productive: How Colorado Had a Gridlock-Free Year. Retrieved from URL – https://www.governing.com/topics/politics/gov-colorado-gridlock-compromise-medicaid.html