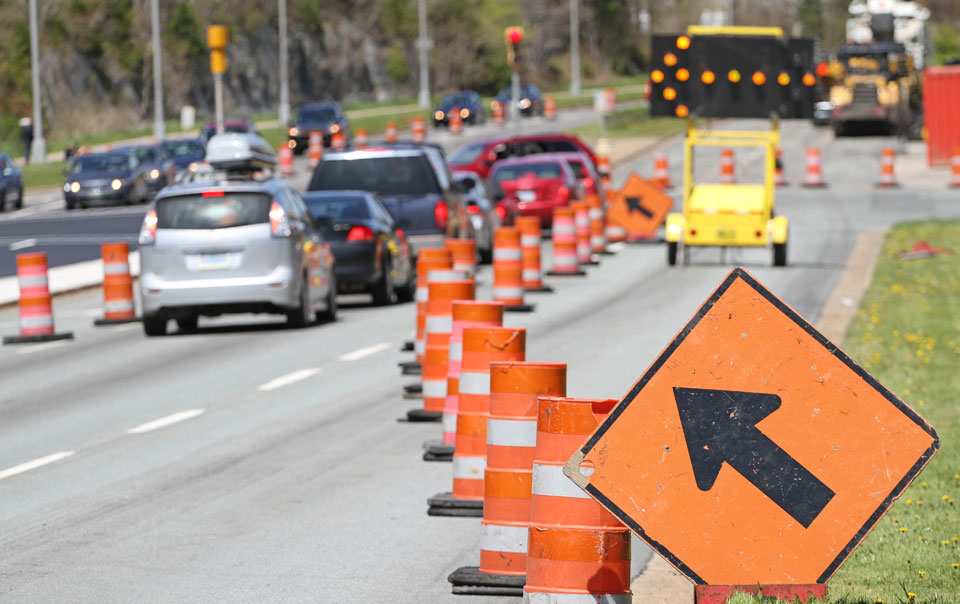 We’re glad to see we’re not the only ones saying this: municipal workers out on the roads have a dangerous job. Yes, the line of work itself poses major risk, but the biggest risk of all is driving out along the highways and roads. At least every other day, a roadside worker is struck by a vehicle, and those accidents are completely avoidable. Make safety a priority every day by teaching your employees how to avoid vehicular accidents. But don’t stop there; let us help you. Public Service Safety has all the fodder you need. Please, continue visiting our website for new content every day and help us make YOUR community safer one driver at a time.

In the early hours, before the sun climbs over the horizon and evaporates the mist blanketing the ground, an Ohio Department of Transportation crew gathered around the tailgate of a truck parked in the Brownsville outpost garage in Licking County one recent morning.

The crew talked about safety. The day carries the threat of extreme heat. Rhonda Blair, a highway technician, advised the workers to stay hydrated and in the shade if at all possible. They then disbanded and headed to their own projects throughout the county.

ODOT maintains 43,211 lane miles of roadway and 14,095 bridges statewide, according to it’s web site. The department is responsible for taking care of U.S. routes, state routes, and interstates.

On any given day, crews could be patching holes, paving, inspecting raised pavement markers, repairing culverts, plowing snow (in the winter), or anything else that needs maintained from the center line out. Often, especially on stretches of highway where speeds can exceed 70 miles per hour, they do this work as vehicles hurtle by them.

Chad Hull is a highway technician in Utica in Licking County. His job is important, he said, because it means people can get where they need to go.

Yet the job can be dangerous.

According to the state, 162 employees have died on the job since the Department of Highways was formed in 1906 and turned into the ODOT we know today in 1972.

Last year, there were nearly 5,000 work-zone crashes that caused more than 100 serious injuries and 19 deaths, ODOT said. Of those, ODOT crews and their equipment were struck by vehicles 152 times.

The most recent death of an ODOT worker occurred in March on Interstate 680 in Youngstown when a driver crashed into a work zone. John Pasko, 53, of Salem in northeast Ohio, was part of an ODOT brush-clearing crew when he was struck and killed by an SUV on March 15.

While mowing grass on the side of a Utica road recently, Hull recalled several close calls he’s had over the years.

Hull said he was mowing a few years ago when a car went off the road and effectively used the tractor he was driving as a ramp.

Hull felt a jolt, he said, and “everything exploded.” He walked away shaken, but uninjured. The safety vest that had melted to the seat, Hull said, was a testament to his luck that day.

Then in January, Hull was plowing when a car went left of center and struck the truck he was driving. He, thankfully, wasn’t hurt that time, either, he said.

Most of the ODOT workers that people see on the roads are highway technicians.

They’re classified into groups numbered 1-5, and to go through each classification, a person has to complete a number of different steps, such as more training. Pay begins at $17.05 an hour at the most entry level and caps out $26.42 at the highest classification. Higher designations such as highway technicians 4 and 5 usually indicate other specializations, like someone moving to work in construction.

Don Smythe started as a janitor in one of the garages, he said. He’s worked for ODOT for 39 years and is now a highway worker — a designation that was later replaced with highway technician.

Working on a freeway exit ramp in Etna township, Smythe said the job scares him “every time I work out here.”

On this morning, he works between a machine that blasts a mixture of stone and tar to fill holes in the pavement and a truck pulling an attenuator, a shield of sorts to protect roadside workers from being struck by passing motorists.

“Our plans change at a moment’s notice,” he said. A change might happen in the case of rain or a car accident. Sometimes, emergency crews may call on ODOT workers to assist in directing traffic or cleaning up debris. “There’s always something to do,” Hill said.

One of the most important jobs is flagging, Smythe said. When flagging, crews direct traffic to stop or move slowly around crews. Highway technician Brent Rittenhouse said the worst part of the work is people running the paddles — failing to obey the signs and driving through against the traffic flow they’re indicating anyway.

That can endanger lives.

“We all got families. We want to go home at night,” he said.

Most of the workers cited the importance of people following the “Slow Down, Move Over” law. The law stipulates that drivers should move over one lane for any vehicle with flashing lights. If you can’t move over, you should slow down.

Hull said when people don’t follow the law and just blitz by, it makes him feel he doesn’t exist.

And they need to slow down, Hull said.

“That extra 10 seconds isn’t going to ruin your day,” he said.