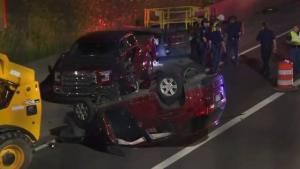 This tragic fatal accident may have several causal factors, but the single solution for managing the risk that led to this event is to isolate city employees from live traffic.  That I, to place a barrier between pedestrian workers and traffic.  Of course, this is a unusual case.  Here, an unoccupied car being loaded onto a tow truck, breaks loose and rolls fast enough to strike and kill Lilianna. If there had been an effective barrier around her, she would not have been harmed.  We must do a better job of isolating workers from live traffic.

Detroit – A construction worker is dead following an overnight crash on I-75 in Downtown Detroit.

Northbound lanes of the freeway were shut down at I-94. Traffic was being diverted off at Warren Avenue. The freeway is back open to traffic now.

Construction crews were doing work on the right lane when the crash happened. Two construction workers were struck by a red SUV that rolled multiple times in the construction zone. The SUV rolled into the workers. The vehicle rolled on top of one of them.

The female driver accused of hitting the workers was taken into custody at the scene, according to Michigan State Police.

She is believed to have been driving under the influence of alcohol.

“These types of incidents are totally preventable. You take the drunk from behind the wheel, and it just won’t happen. This was a fully-marked construction zone, barrels and arrow boards, attenuator, everything you could possibly used to protect a construction worker who is trying to make a living, and here comes another driver who didn’t do the right thing,” said Shaw.