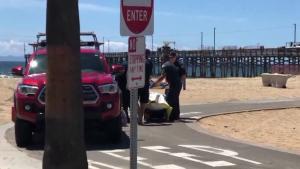 We constantly preach that driving a vehicle is the most dangerous thing your employees.  Of course, our focus is usually on the risks associated with driving amongst traffic, cyclists and pedestrians.,  In this case, a city employee was essentially off-roading on the beach when he ran over a woman.  Our defensive driving protocol, LLLC™, which teaches Look Ahead, Look Around, Leave Room and Communicate may have prevented this accident.

A woman was taken to a hospital after being hit by a pickup driven by an on-duty city worker while she was lying on the sand in Newport Beach on Thursday afternoon, officials said.

The employee was driving a city-owned GMC Canyon just east of lifeguard Tower 20 when the woman was struck around 1:15 p.m., said Jennifer Manzella, spokeswoman for the Newport Beach Police Department.

The truck had been traveling at low speeds toward the ocean just south of the Newport Pier when the woman was hit, Manzella said.

The woman was taken to a nearby trauma center with injuries to her chest and pelvis. Manzella said the injuries did not appear to be critical or life-threatening.