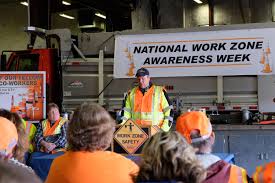 This risk is real.  The numbers are sobering.  Anytime we have a pedestrian worker in live traffic, we have huge exposure to loss.  Please be sure to use ALL of these precautions:

Link, a supervisor in Johnson County, was struck while working on the shoulder and again as he patched potholes. He said he was fortunate not to have been injured in either of the incidents.

“I think my biggest concern for me, is even with all the lights, traffic control, advanced warning, our safety is in the hands of the citizens that travel the road everyday,” Link said. “I sometimes feel that citizens driving do not see us as people with families, a family that we love and want to go home to. Furthermore, we’re objects in the way, obstructing their busy schedule, a nuisance that causes them to be delayed. I want people to know that we are there to provide a service to maintain the safety of the roadway.”

In 2017, 12 people were killed in work zone crashes and nearly 500 people were injured in Kansas, said Catherine Patrick, KDOT state transportation engineer. Eleven of those victims were motorists and the 12th person was a tow truck driver who was working along a highway in central Kansas.

“Regrettably, while we are out there doing our jobs, most of us have also experienced many close calls or worse,” Patrick said. “Our goal here is to bring awareness, bring understanding and bring a sense of responsibility to motorists that safety is a two-way street.”

Kansas Highway Patrol Superintendent Col. Mark Bruce said he was struck by the numbers: since 1950, 37 KDOT workers and two Kansas Turnpike Authority workers have been killed.

Since KHP was established in 1937, 10 officers have been killed in the line of duty.

“That really frames the dangers associated with what these folks do in our work zones across the state,” Bruce said.

Bruce Winkle has been with KTA for 39 years. In that time, he has been involved in seven collisions. While most were minor incidents, one ended in tragedy. Winkle was assisting a woman whose car had slid off the road during an ice storm. As another vehicle approached their location, it lost control. He sprinted into a ditch. The vehicle struck his truck and the driver was killed.

“Being a part of a moment like that is devastating,” Winkle said.

“Please drive safe in work zones and protect everyone — motorists and highway workers,” he said.

Bridges and structures across the state will be lit in orange through Friday in recognition of National Work Zone Safety Awareness Week.